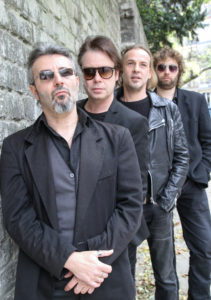 At a time when the Rival Sons and other Temperance Movement or Cadillac3 succeed step by step in crossing paths with fans of heavy riffs with wide-open ears spanning several generations, a kind of “new Classic Rock wave” thrusts to the front of the club scenes such young bands as Blues Pills, Tyler Bryant & The Shakedown or Simo. It was high time…

This new audience will have to look no further than the case of JESUS VOLT, a French quartet that has worked for slightly more than fifteen years and didn’t wait for the return in full force of the guitars to fly the banner of what could also be called “New Rock Blues…” A Banner under which meet all these bands
whose roots thrusting down into the traditional blues, are grafted naturally onto other rock music movements. Not content with having released four studio albums and one live album, these Parisians tour a lot: in France, of course, but also in Germany, Poland, the Benelux, and even in Australia…

Australia…there, in 2003, they caught Tony Cohen’s eye – a producer known for his collaborations with Nick Cave, Sacred Cowboys or Michael Hutchence. With him JESUS VOLT
recorded “in Stereo” reaching a new stage in their musical career. After the release of a live album – where a beat box and samples blend with spellbound guitars and other voodoo screams to transcend their original compositions as well as covers of Muddy Waters and Curtis Singers songs – another Aussie will take in hand the sound of the combo. The man is called Mark Opitz. You will find his name on the credits for such albums as “Powerage” by ACDC, “Face to Face” by The Angels, “Circus Animal” by Cold Chisel, or “Welcome to Wherever You Are” by INXS… In 2013, “Vaya Con Dildo”, JESUS VOLT’s fourth album, adds to the long and remarkable
list of the records produced by this man with the gold fingers distilling a raw and basic sound but always true and appropriate.Keeping their heads up and working hard, JESUS VOLT toured nonstop for almost two years during which they were the opening act, among others, for ZZ top and their beards on “No Futura Tour” French dates, and cross Joe Bonamassa’s path in Poland or meet up with Johnny Winter in Germany.
During the same period, between two gigs, the band started writing new material. Quite simply named “Jesus Volt”, as if it heralded a new beginning, this 5th album was recorded, like its predecessor, by Mark Opitz and sound engineer Peter Deimel (The Kills,
Hushpuppies, Deportivo, Deus) at the BlackBox studio in Angers, a true cavern of Ali-Baba full with old vintage stuff and gear. Beautiful, sometimes dreamy then taut, always intense, the songs highlight a band who always strives to keep things interesting. The guitars are calibrated, targeted, the bass and drums duo
grooves without limit, whereas the touches of keyboards and harmonica are just rather present and bring an even more attractive coherence. It is over this beautiful set that the singing of Lord Tracy reigns supreme, sometimes aggressive, often punchy; that guy manages even to be almost
melancholic on ” Sounds of Rome “. So, of course, Xavier, Jacques, Julien and Olivier are not called Dusty, Billy, Jimmy or, Kenny, and they are based in Paris,
France, not in Texas… and yet, when you listen to such bluesypieces as “I’m a Jerk” or “The Chant”, it appears obvious that those four could have been born somewhere in the Deep South before meeting in Crossroads…but it does not matter since ultimately, they were baptized by the same electric current flow which unites the apostles of the big sound.